Notre Dame Academy was a powerful launching pad for my life. I learned that I would be rewarded for high standards and hard work which, with the grace of God, has proven to be the case during my 35 years in the financial asset management business. I learned to be a leader, to be creative, and to take risks.

Sometimes even I am surprised that I took the biggest risk of my career and founded ARK Invest four years ago at the age of 57. I listened to the call through the Holy Spirit, who has guided me along my journey and is my inspiration. Thanks to that guidance and the grace of God, ARK Invest is ramping nicely and has become profitable.


I felt much gratitude at NDA, thanks to the sacrifices my parents made to put their children through such a special school...and I strive to imbue my three wonderful children and other young people with that same sense of gratitude and wonder today.  Through the Duddy Innovation Institute, I hope that many young women at Notre Dame Academy will find the inspiration, knowledge, and perspective to change the world and make it a better place, as the innovation in genomics, automation, energy storage, artificial intelligence, and blockchain technology explodes during the next few decades.

Award-winning actress, accomplished director, former United Nations Ambassador, and one of the world’s most recognized and admired stars. Her portrayal of Sue Ellen Ewing in the original TV series Dallas brought her international fame and critical acclaim. Voted “Woman of the Year” by the Hollywood Radio and Television Society, Linda has appeared in numerous TV movies and television series as well as starring in theater productions on Broadway and in London’s West End.

Notre Dame Academy gave me my roots and gave me my wings and I will always have deep gratitude and love for the Sisters and lay teachers at NDA.

Alexis A. Thompson, MD, MPH, '76.
Alexis A. Thompson, MD, MPH is the head of the hematology section of the Division of Hematology Oncology Transplantation at the Ann and Robert H. Lurie Children's Hospital of Chicago, where she also serves as the A. Watson and Sarah Armour Endowed Chair for Childhood Cancer and Blood Disorders. Dr. Thompson is also Associate Director of Equity and Minority Health at the Robert H. Lurie Comprehensive Cancer Center of Northwestern University.  She has recently been elected as Vice President of the American Society of Hematology and serves on the ASH Sickle Cell Task Force.

Dr. Thompson has received several prestigious awards, including the Robert Wood Johnson Foundation Minority Faculty Development Award as well as the Minority Scholar Award in Cancer Research from the American Association for Cancer Research.  She recently received the Frank A. Oski Memorial Award from the American Society of Pediatric Hematology Oncology in recognition of her contributions to the field.

Lana Condor, ’15.
Lana Condor is a professional actress and accomplished dancer. During her senior year at Notre Dame Academy, Lana landed her breakout role as Superhero Jubilee in the 2016 movie "X-Men Apocalypse." She next appeared in Peter Berg's drama film Patriots Day, depicting the events and aftermath of the Boston Marathon bombing. Condor is currently set to star as Lara Jean Song Covey in the film adaptation of To All the Boys I've Loved Before (2018), and as Koyomi K. in the science fiction film Alita: Battle Angel (2018).

Kristina Richardson, ’85.
Kristina Richardson, recently returned to Los Angeles with her husband and baby boy. Kristina is studying for her PhD in system engineering at U.S.C. Viterbi School of Engineering. An Iraq war veteran and army aviator, Major Kristina Richardson earned her master's in engineering and management from the Massachusetts Institute of Technology, a BA in environmental engineering from West Point, went to flight school in Alabama and deployed to combat in Iraq during The Surge (2006-2007) in support of the 25th Infantry Division. 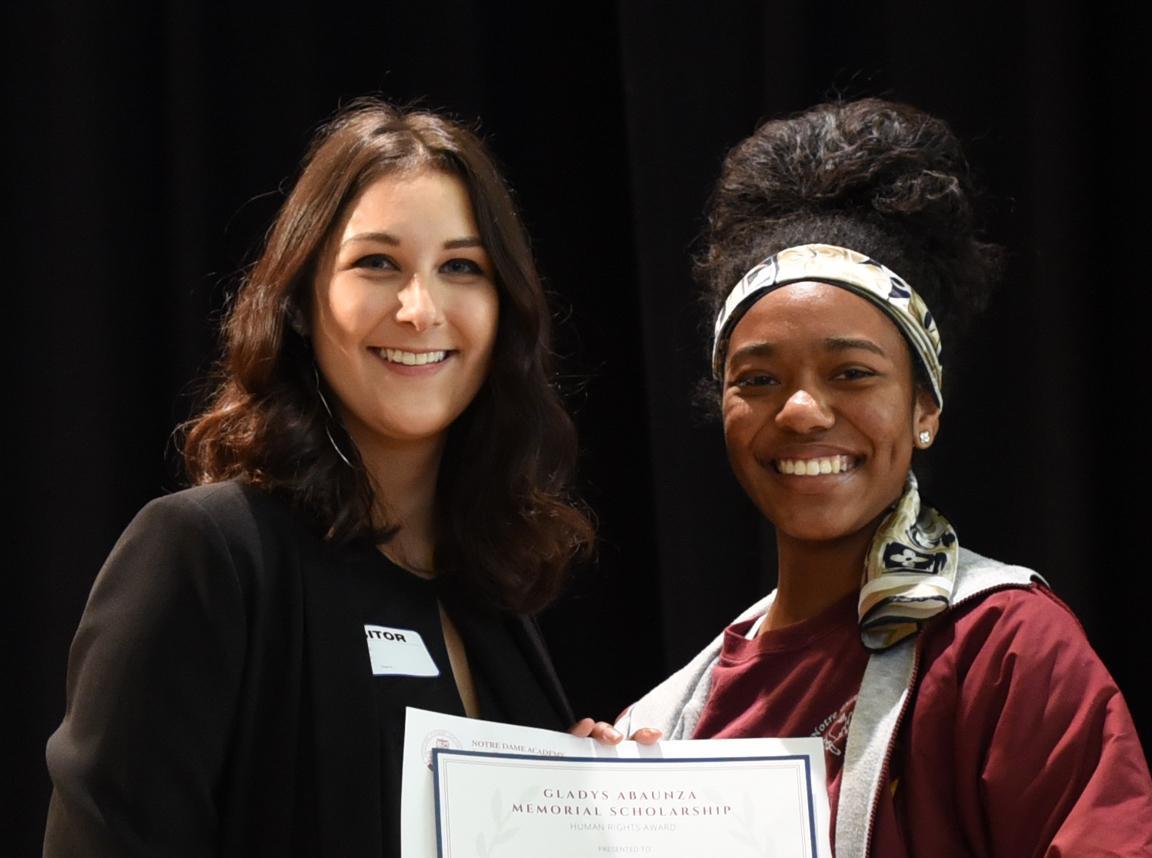 Larissa Peltola, '14
Larissa is following in the path of women dedicated to social justice and human rights advocacy. Larissa was awarded a Fulbright Scholarship and will be going to Hungary in the fall of 2018 to work, for nine months, with the Roma people (the most marginalized and disenfranchised in Europe). Along with receiving national academic honors, she was also awarded Best Thesis on Human Rights for her thesis that will be published soon. Larissa is pictured here awarding a NDA student with the human rights scholarship in her family's name.
Read more about her accomplishments here - https://www.cmc.edu/human-rights

After leaving NDA, I received three degrees in Engineering: one from Loyola University (now LMU), one from CSUN, and one from UCLA. I spent 43 years at Rocketdyne, where my major work was on the Space Shuttle Main Engine. I retired from aerospace and am engaged in the management of my husband's environmental engineering company. We have a 50 acre ranch in the Santa Monica Mountains on which we commercially raise avocados and loquats.

Kimberly Rose Moekle, ’85.
Kimberly Moekle teaches in the Program in Writing and Rhetoric (PWR) at Stanford University, and helped co-found the Stanford Undergraduate Sustainability Scholars (SUSS) program.  She has also co-taught a pilot graduate seminar in the Interdisciplinary Program for the Environment and Resources (IPER). She completed her Ph.D. in Comparative Literature at the University of California, Irvine (UCI) in 2000, where she held a variety of teaching and administrative positions, and served as an Assistant Course Director for Undergraduate Writing.

From NDA, I attended UC Santa Barbara on a full volleyball athletic scholarship where I started all four years and received both academic and athletic All-American honors. After college I played professionally for a couple of years, then earned my MBA at LMU. I worked in law firm business development for 15 years. In 2001, I married Kevin Martin and in 2005 we had twins, Kate and Emmett. In 2012, we had our third child, Camille.

With my sister Jennifer Boehle (’93), I started a baking business six years ago. We make a product called “Remarkable Bark” that we are producing for Costco. Oprah Winfrey called it “scrumptious” when she included it in her “Favorite Things” of 2014. It has also been featured on Good Morning America and The Rachael Ray Show.

I was honored to be the first person inducted into the NDA Athletic Hall of Fame. My niece, Ella Boehle, is at NDA now and plays on the varsity volleyball team.   I enjoy going back to NDA to cheer her on.  It is great to be back at school and see all the changes!

Allison Ahlfeldt Compton, created the first women’s Paralympic Volleyball Team. In 2004, Allison was a Paralympic Bronze Medalist in volleyball in Athens, Greece. Allison is a mother of two, works at Liberty Mutual and is a sought after motivation speaker on tour.

After graduating from Notre Dame Academy, Tina studied costume design at California Institute of the Arts and later went on to work as a wardrobe stylist for film and television.  Though Tina initially loved her job, she soon felt something was missing.  Tina realized she missed having time to volunteer and contribute in a bigger way. Tina felt something in her life had to change.

In September 2009, Tina participated in a volunteer program abroad which landed her in Hohoe, Ghana. There, she quickly became enamored with the culture and warm hearts of the friends she made.  Tina also fell in love with the Dutch wax and West African batik textiles that she saw all around her. Tina decided to start working with a seamstress to make souvenirs to bring home to her family. Once seeing the finished product of the bag she designed, she realized they could be sold at places like Nordstrom and Anthropologie.

Tina decided right then to commission 50 more bags to bring back home with her. With her background in business and design, Tina teamed up with local entrepreneur Nii Addotey to begin her ethical clothing line.  They hired seamstresses and her designs started to come to life. Tina named her clothing line Della after the first Ghanaian she met upon landing.  Della has grown into a socially responsible fashion line that provides jobs, education and skills training to women and men of Hohoe.  Tina wanted to ensure that people don’t think of Della as a charity organization, but rather as a company that makes relevant fashion that also happens to do good.  Della’s products have been sold in over 100 stores worldwide including Urban Outfitters and the Apple Store.  They also had a partnership with Vans to make shoes using their batik fabrics.

Tina recently was a featured speaker at TedxAccra in Ghana. Take a look at her presentation and interview by clicking the link below.